It’s hard not to be seriously impressed by Santa Maria Novella station, but I’m never really sure whether I ought to be. It is, after all, a monument to the evils of Fascism just as much as it is a magnificent Modernist railway terminus. Fascist dictator Benito Mussolini, who ruled Italy between 1922 and 1943, is famous for his desire to make the country’s trains run on time. Santa Maria Novella is a solidification of that intent, a clean-lined rational reconstruction of the Italian state railway along efficient, effective and punctual lines. Mussolini’s ideas for Italian Railways were part of his drive to drag Italy from chaos and drift into an organised and efficient nation.

The present station replaced its predecessor, Maria Antonia, in 1935. A competition for its design was won in 1932 by the Tuscan Group of architects headed by Giovanni Michelucci. It gets its name from Santa Maria Novella church, located on the opposite side of a large piazza which, in true Italian fashion, is a slightly confused muddle of informal bike parking, mopeds, buses, trams, and cars obeying traffic rules known only to the Italians. While the church is all Gothic twiddliness and polychromatic stonework, the station is austere and monochrome, finished in ‘pietra forze’, a brown sandstone endemic to Italy and used frequently on other buildings in Florence.

While in Germany Adolf Hitler had his pet architect Albert Speer, who wanted to rebuild Berlin in vastly over-blown Roman style, Mussolini (living entirely up to his caricature of being fat and lazy) appears to have had no particular desire to impose any strict visual discipline on his brand of Fascism. Almost by accident as much as design, Italian Fascism became associated with a sort of muscular Modernism, very apparent in pictorial propaganda. Architecture in Fascist Italy started out as something similar to the German Fascist architecture based on ancient Rome, but Santa Maria Novella station acted as an early example of the Modernist and eventually Futurist approach to building that would later come to be recognisable as Italian Fascist architecture.

You’ll read frequently that the plan of the station echoes that of the ‘fascio littorio’, the bundle of sticks with an axe-head protruding, used as the symbol of the Italian National Fascist Party. So it does, but there’s little clear agreement on whether the resemblance was deliberate.

At the front of the station is a modern take on a very old architectural concept frequently seen on early railway stations, the ‘porte cochere’ (or covered entrance with space for vehicles underneath, for those who prefer to avoid showing off). Light is let in through a glazing run which starts on the front wall of the vehicle porch, extends over the top and then runs right over the ticket hall behind and on to the roof of the main concourse, which runs across the station between the ticket hall and the platforms. There it joins up with a run of pitched glazing along one side of the concourse roof, providing plenty of natural light. These skylights are grid pattern, with small panes of glass. This is easier to show than to explain. Here:

It’s a spectacular space, somewhat reminiscent of the gallery in Mackintosh’s Glasgow School of Art to my mind. Frank Lloyd Wright is also said to have been an influence, and you can see it in the flow of glazing over the building. The floor of the concourse is particularly notable, finished in striped red and white marble. The concourse is decorated with various works of art including sculptures and paintings, but none are perhaps as important as the later memorial which remembers the trainloads of Jewish people transported from Santa Maria Novella to concentration camps in Germany. It’s a solemn admonition of the uncomfortable history which the station embodies, despite its qualities.

The ticket hall is incredibly airy, thanks to its largely glazed roof. It sports square columns of black marble, which contrast with the pale brown marble used for the walls and match the black marble flooring.

The platforms, while less overtly spectacular than the main building, feature dramatic and lengthy streamlined canopies with integrated lighting.

The details of the station are quite special, if unnerving reminders of the Fascist era. The signage is bold and clear, but uncomfortably authoritarian in the manner you’d expect of Fascism.

The best individual detail is probably the station clock, an extraordinary example of an early digital clock rather than the analogue clock face more familiar at railway stations. Under Mussolini’s regime, the trains would run on time, and this modern timepiece underlined that intention. There were several others inside the station, years ahead of their time.

Just to the north of the station is one of the most extraordinary modern signal boxes in Italy. It’s by another Italian Fascist architect, Angiolo Mazzioni, who would later go on to design Roma Termini, which has a transverse concourse which draws inspiration from Santa Maria Novella, although it’s at the front of the station rather than between the platforms and the ticket hall.

I want to rave about Santa Maria Novella. It’s exactly the sort of station I usually love, a Modernist classic full of geometry and light, and enhanced by stylish details. But I find I can’t. I just can’t muster the will to really enthuse for a building born of despotism and cruelty. It raises too many questions about whether you can admire something created for the wrong reasons. Do architects bear personal responsibility for designing buildings for an immoral regime? Did they have much choice? Should we demolish buildings associated with oppression regardless of their intrinsic qualities? How much is art and architecture implicated in oppression? I’m not sure I know the answers.

All despotic regimes fall in the end, and Mussolini’s reign finished at the end of a rope tied to a streetlight. While streetlights are a rarely considered piece of transport-related infrastructure, it’s fair to say that was one of those times when they really played an important role in history.

Mussolini might have tried to make the Italian railways run on time, but it was a futile effort. I’ll leave you with this story. A few years ago, I caught a train from Brig, Switzerland, to Milan, Italy. The stations in Switzerland were spotless, and the train journey started with the to-the-second precision you’d expect from Swiss railway operations. After we travelled through the tunnel under the Alps, we passed a run-down, litter-strewn and graffiti-ridden Italian station, shortly before grinding to a halt in the Italian countryside. And there we sat, for well over half an hour, without a word of explanation being offered, before we slowly got going again and rolled into Milan nearly an hour late. But given the choice between timely train travel under Mussolini, or the unconcerned unpunctuality of normal Italian train services, it’s rather reassuring to experience the latter.

An article about a television programme about Italian Fascist architecture from The Guardian, here 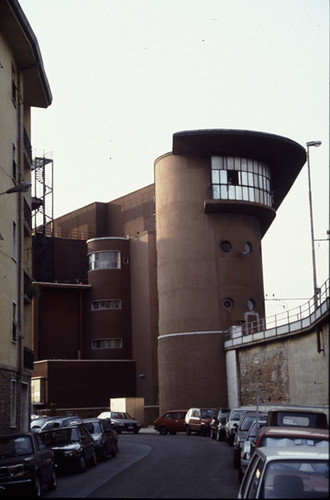